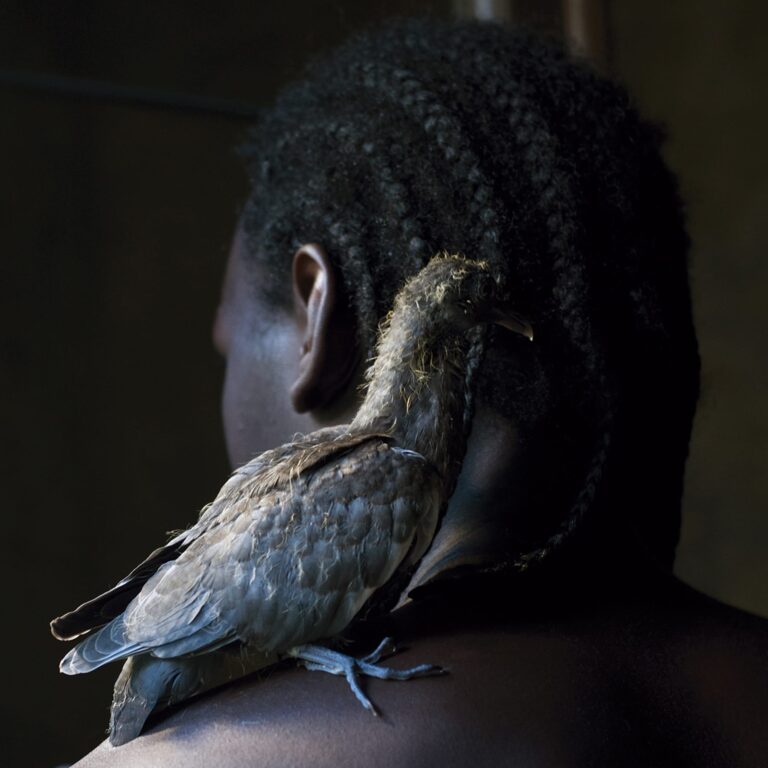 Fabiola Cedillo’s Los Mundos de TITA is part loving homage, part fever dream. The series follows her older sister Tita, who was diagnosed with a rare brain disorder as a child. Now in her thirties, Tita remains in a childlike state, in need of her family’s full-time care and attention. “Our communication is based on hugs and deep gazes,” writes Cedillo’s father in a statement preceding the series. “Her fragility and hyperactivity drive us forward into taking care of her without rest.”

The series sets fragments of girlhood alongside surreal visions. In one image, stickers dance along the wall of a brightly lit bedroom awash in pink. In another, a grown man crouches naked and wet in a plastic washbasin far too small to hold him. Cedillo presents the series in diptychs: in one pairing, a white horse looks out from behind the metal bars of its stall. From behind the invisible confines of her disability, so too does Tita look out at the world.

Communication is a challenge for Tita and her family. Punctuated by dense shadow and the absence of information, Los Mundos de TITA conveys Cedillo’s frustration and longing to connect with her sister. Be it a mural half-painted white, or Tita’s back to the camera, Cedillo’s photographs remind us that pieces of Tita’s world remain just out of our grasp. On the other hand, they are also brimming with love, humor, and irony. Cedillo made the important choice to include her sister’s drawings in the work; they’re perhaps the most poignant images of all. Alongside portraits of Tita holding her cat, each drawing is an emotive message authored by Tita herself.

Los Mundos de TITA is a nuanced portrayal of someone who faces communication barriers, but whose expression is limitless. With tenderness, it also maps the relationship between sisters who, despite speaking disparate languages, are inextricably connected. Cedillo reminds us that Tita could be any of us. “We all [live] life between reality and fantasy, between dreams and nightmares. We’re all fragile and strong, each with our particular limitations,” she writes. In a visual landscape where the lives of disabled individuals are seldom pictured, spending time in Tita’s world is an extraordinary experience.